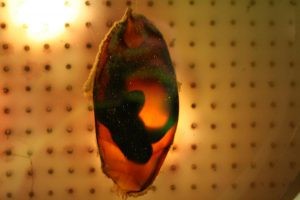 Brown banded bamboo shark is a small shark that has a long slender body and tail. It has a wide snout at the front of both eyes that its eyes are small. The upper lobe of caudal fin is curved, slender and longer than the lower lobe. In juveniles, there are 13 black and white stripes crossing their body that gradually fade out when they growing up, and finally the color body of the adults become brown. This shark has tentacle-like organs in the front part. Thus, it is named “cat shark” as well. 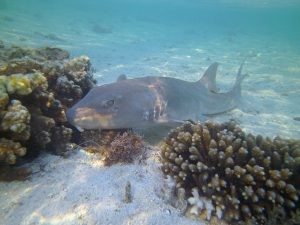 Brown banded bamboo shark is a laying egg shark (oviparous). Their ovule is in an oval egg that is slightly flattened, and arounding with a sticky fiber that used for attach to underwater substrates.  Female shark lays eggs by using sticky fibers attaches to substrates and then leaves without taking care of the eggs. Shark eggs take approximately 90 days before hatching to shark juveniles. Each year, a female shark lays about 200 eggs. 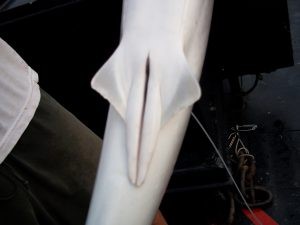 Brown ​banded bamboo shark is a demersal fish. Thus, it has a behavior of staying still on the ground to wait for hunting shellfish, shrimp, crayfish, and crabs as their foods.

Frog sharks are commonly found in sandy bottoms of coral reefs in the Indo-Pacific waters, from India, Malaysia, Singapore, Indonesia, Vietnam, China, Taiwan, Japan, Philippines to northern Australia and Thailand in which they are found both in the Gulf of Thailand and the Andaman Sea.