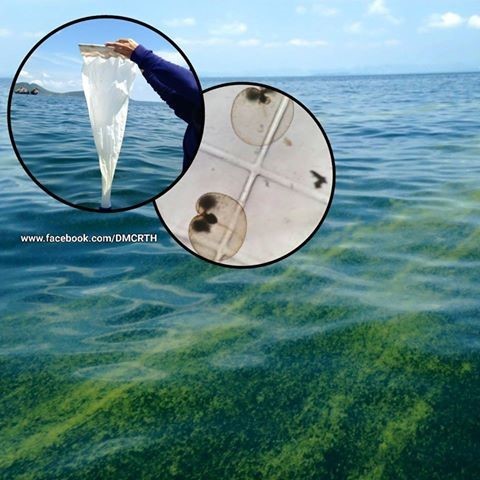 The red tide is a natural phenomenon of harmful algal blooms (HABs), known as seawater color change. It is the phenomenon of world’s attention because it affects both directly and indirectly human health as well as the economy relating to the marine resources.

Seawater colour change or known as whale poop phenomenon is a natural phenomenon when phytoplankton grow drastically and multiply rapidly causing the seawater colour change to the colour of the increasing pigment of such phytoplankton. Phytoplankton disperse by floating or flowing with water as suspended sediment in clumped or lined along with the wind and water currents. However, in abundancy of toxic marine algae, it is the event that the phytoplankton rapidly produce high amount of toxins until exceed the normal level of them in natural seawater even without producing pigment or changing the colour of sea water. So, the higher abundance of toxic marine algae can occur whether or not at the time of the colour changing of sea water phenomenon.

The seawater colour change phenomenon in Thailand has been reported since 1952, and almost occurred in coastal areas in the Gulf of Thailand, especially in the area of upper Gulf. The dinoflagellates, diatoms and blue-green algae phytoplankton are the major causes of the seawater colour change in Thailand. Dinoflagellates are the most of attention for research and monitoring because it rather has a potential to create toxins which can accumulate in the plankton-feeding marine fauna and enter human food chain that affect human health or cause of human mortality. Currently, approximately 300 species of phytoplankton have been reported as a cause of seawater colour changing that almost a quarter of which can produce toxins.

Toxins produced by phytoplankton are divided into 5 groups:

The increasing of nutrients in seawater is the major cause of phytoplankton blooming. Nutrients releasing to seawater mostly from human activities e.g. from activities of households and coastal communities, tourism, restaurants and plants along the coastal and river sides, fishing activities, fishing ports, and aquaculture. These activities cause the pollution of the sea and are the sources of nutrient including bacteria. 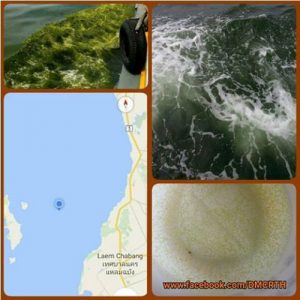